Sinagua Malt is a benefit corporation located in Camp Verde, Arizona. Our purpose is to provide a market solution for declining flows in the Verde River. We work with local farmers to switch their crops from water intensive agriculture in the summer to winter crops such as malting barley. We then malt it and provide craft breweries, distilleries, and homebrew supply stores with Arizona base malt.

In 2015 Chip Norton, Verde Conservation District Supervisor, and Kim Schonek, Verde River Water Transactions Manager for The Nature Conservancy, were working with local farmers to adopt irrigation practices that used less water while increasing crop productivity.  Both the yield and the barley quality were good, so Kim and the Hauser family coordinated to plant approximately 144 acres of malt barley in January 2017.  At that time, Kim suggested that a seasonal shift in crops, such as switching from alfalfa (a high water demand summer crop) to winter wheat (a lower water demand winter/spring crop) could also improve summer river flows.

After further research, Kim and Chip embarked on a malt barley pilot project with Hauser Farms in Camp Verde, Arizona.  Zach Hauser planted 15 acres of Harrington 2-row malt barley at TNC’s Shield Ranch in February 2016 and harvest occurred in late June.  Both the yield and the barley quality were good,at about 3 tons per acre. Brandon Ade with Blacklands Malt in Austin, Texas, generously agreed to contract malt a portion of the barley, and in late August The Nature Conservancy was the proud owner of two tons of beer malt made from local grain. We distributed the malt to selected craft brewers in Arizona to confirm that craft beer of the highest quality could be produced with our local malt. The results were positive, as reported in this New Times article. As a result, Kim and the Hauser family coordinated to plant approximately 125 acres of malt barley in February 2017.  Chip, working with fellow Director Steve Ayers, created a business plan and agreed to develop a malt house in Camp Verde, which started operation in April 2018. 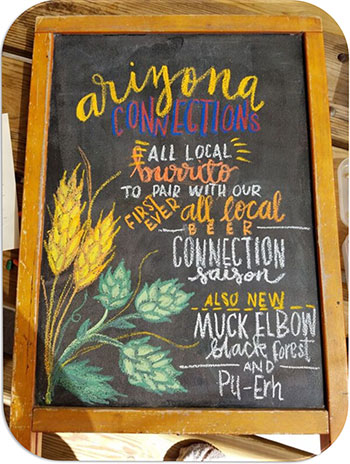 As the 2017 harvest also proved to be successful, the Hauser family converted 150 acres of alfalfa and corn fields to barley cultivation. The first commercial batch of base malt by Sinagua Malt was delivered to craft brewers in May 2018. Since then, Sinagua Malt has been providing barley grown and malted in the Verde Valley to the state of Arizona.

As of September 2019, 433 cumulated acres of farmland have been converted to barley, and subsequently, 425 million gallons of water have been kept in the Verde River since the beginning of the project. Fifteen breweries across Arizona and other states have used Sinagua malt in their recipes, and two homebrews supply stores have carried our base malt for the homebrewers to get a taste of the Verde Valley in their brews.

In addition to the water being kept in the Verde River, Sinagua Malt is conscious of its internal water use. Thus, 580,000 gallons of water are being offset through the Verde River Exchange Water Offset Program in 2019.

Sinagua Malt aims to expand the partnership with other farmers in the Verde Valley dedicated to keeping rivers flowing.