Sinagua Malt News will focus on market solutions to river conservation challenges, primarily in the West. News articles will feature innovative approaches to conservation by private enterprise, governmental entities, nonprofit organizations, or partnerships thereof. We hope that you find the content of interest!

An Arizona town gambles on beer to save water.

Kim Schonek stands at the edge of the barley field, keeping a wary eye out for a rattlesnake she saw nearby the other day. The soft, green barley stands chest-high, swaying in the warm winds of the Verde Valley. In another week, it'll begin to dry out under the June Arizona sun.

“Soon it’ll be amber waves of grain,” she says with a smirk. Everyone makes that joke around here, in the small town of Camp Verde. Barley, in this region full of alfalfa and field corn, has lately become the talk of the town. 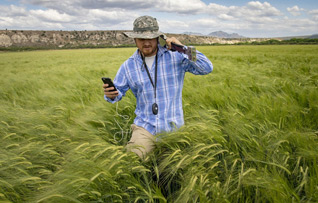 How Growing Barley for Beer Could Help Save the Verde River

Sinagua Malt House is teaming up with farmers and brewers to create demand for less water intensive crops.

Chip Norton prefers being on the water to anything else. Moving his boat through the rapids and observing nature helps to clear his head. That’s why he was devastated to think the Verde River could stop flowing during Arizona’s summers, due to increasing water demand, drought and climate changes.

“The river is my happy place,” says Chip, a river recreationist turned conservationist. “I’ve rafted in Alaska and fly-fished in Idaho. Nothing compares to the Verde when it comes to diversity.”

Brewing Water Conservation in the West

“When you start to build houses and stop growing cotton, you’re going to save a lot of water.” With that quip, Kim Schonek sums up how Arizona’s population has managed to blossom in the middle of the arid West while reducing its water use at the same time. Since 1980, the population of Phoenix has more than doubled, yet total water use has decreased by about one-third.

Some back-of-the-envelope math helps demonstrate how: An acre of cotton needs about 3 acre-feet of water, or roughly the same amount of water to meet the needs of six average Arizona families. If 100 acres of cotton fields were converted into subdivisions with quarter-acre lots, water use would decline by roughly a third. 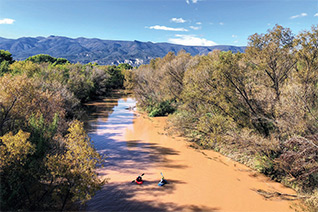 CAMP VERDE, AZ — The next time you grab a nice, cold beer, you may want to ask the brewer what work went into that glass.

There is a unique partnership happening in Arizona between farmers, those involved in the malting process, and brewers that is saving thousands of gallons of water from being taken from the Verde River.

One of those taking part in this water-conservation effort is farmer Kevin Hauser in Camp Verde.

"Well, you know, a typical day... some aren't so typical," laughed Hauser.

Long before your favorite beer reaches a tap or bottle, beer is an agricultural product. From the Mid-Atlantic to the Arizona desert, craft beer is at the center of the “going local” movement that extends far beyond the breweries themselves.

“People want to know and should know where their food, including beer, comes from,” says Tom Barse, the owner and brewer of Milkhouse Brewing in Mt. Airy, Maryland, one of the brewers grasping the trend. “In addition to helping us make the best beer possible we are putting money right back into our local farms.”

Barse and Chapman are on the front line of an emerging movement to unite grain and hop farmers, malthouses, universities, and brewers “going local,” serving the blossoming growth of small, community breweries across the country. This nascent infrastructure is sprinkled with creative brewers, startup malthouses, farmers looking for diversity and willing to take a chance, and even persons promoting heritage grains and hops. 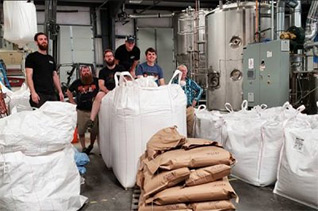 Farmers, Brewers, and Conservationists Partner to Keep a River Flowing

The fact that a pint of beer requires a whopping 37 gallons (140 liters) of water to produce can turn a favorite beverage into a guilty pleasure.

But what if, instead, each hoppy sip helped add flow to a depleted river?

If all goes according to plan that will soon happen in Arizona’s Verde River, a flowing gem in the Colorado River Basin and a lifeline for fish, birds and wildlife in the American Southwest. But like many western rivers, the Verde flows low, and in some stretches not at all, during the hot summer months, when farmers divert water to irrigate crops.

And that gave Chip Norton, a retired businessman and river enthusiast, an idea: switch a portion of the valley’s farmland from crops like corn that are thirstiest in summer to barley, which grows earlier in the year and so requires much less water when the river is stressed.